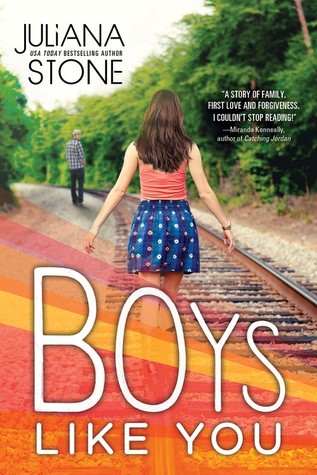 For Monroe Blackwell, one small mistake has torn her family apart–leaving her empty and broken. There’s a hole in her heart that nothing can fill. That no one can fill. And a summer in Louisiana with her grandma isn’t going to change that…

Nathan Everets knows heartache firsthand when a car accident leaves his best friend in a coma. And it’s all his fault. He should be the one lying in the hospital. The one who will never play guitar again. He doesn’t deserve forgiveness, and a court-appointed job at the Blackwell B&B isn’t going to change that…

There’s No Going Back

Captivating and hopeful, this achingly poignant novel brings together two lost souls struggling with grief and guilt–looking for acceptance, so they can find forgiveness.

This is a love story that Nicholas Sparks would be proud of to write or even read about. It’s something that stands up to the rest of the contemporary romances that are found all over the place. It’s unique and hopeful, dealing with subjects that come so close to heart to many people out there. It’s a love story that’s completely believable and beautiful. I can imagine something like this happening and real life and it wouldn’t sound like some kind of stupid story that is impossible.

Juliana Stone’s Boys Like You hit me and I couldn’t stop tearing up in my heart. It was happy and sad, all at the same time, where the two beautiful characters needed each other more than everything else happening to them. It’s such an inspirational novel that means so much to me and there isn’t one wrong thing about it.

“I’ve learned in my sixteen and a half years that there are things that will surprise you because you don’t see them coming. They can be hard, painful things, and it’s those ones that will live with you forever, bound to your soul in layers that grow thicker each year. Hopefully those layers will eventually dull the pain.” (186)

This is one of those perfect summer love stories between two people who are kind of attracted at first sight. But I wouldn’t classify it as instalove, either. It’s between Monroe, a girl from New York City who’s trying to get away from the rest of the world after her extreme mistake that she feels is all her fault and Nathan, who’s trying to get over the fact that his best friend is in the hospital, in a coma, all because of him. It’s a beautiful story that just kind of forms out of nowhere, but it’s truly memorable.

The plot was completely entertaining and intriguing from the start. I felt mesmerized with all of it from start to finish, leaving me truly believing that it’s the most enchanting story about first love from the time I began it to the last page, and even after. It’ll leave you with a hole in your heart—because there’s no more to the story than the pages that you’ve already flipped. It’s exhilarating and interesting.

We always look for chemistry in a fictional relationship, right? Some characters don’t have that; Nate and Monroe did. Their relationship turned out to be healing, though completely sexy as one with two wild individuals would be. As Monroe’s grandmother says, they caught each other and are meant to be. It’s not something you’ll read about in a movie or have issues with because of corniness. It’s charismatic, as every portion of the novel is.

Boys Like You initially gave out the vibe of a girly, chick-lit, ordinary contemporary novel that I only read because I own another novel by the same author. It’s more than chick-lit, it’s beauty, and I’m so excited to continue to read Stone’s work in the future as it’s unlike anything else I’ve read in the past. Every girl or book lover would find something special in this novel, and it’s now your turn to explore Monroe and Nate’s electrifying story.

what is your opinion of contemporary novels? what if you disliked them, but someone told you this one is completely different than the ordinary? would you still go for it?